The Kunama people of Eritrea are located in the Gash Barka region in and around the regions capital of Barentu. Also known as “Baza” or “Bazen”, Kunama were one of the first inhabitants of Eritrea, migrating to South West Eritrea from Southern Sudan. Kunama society is organized in 6 main clans based on land, and these groups are also divided up into smaller groups. About 70% of Kunama follow an ancient religion, that centers around a god called Anna, while the rest of the population has converted to either Islam or Christianity in the late 1800’s.

Kunama dress for women usually consists of brightly colored clothing and several pieces of beaded jewelry in their hair, wrists and around their neck. The men usually wear white cloth shorts with straw hats. Formerly nomadic, today Kunama are sedentary farmers who collectively in tasks such as building homes, farming and collecting supplies together. Everything is done as a group in Kunama society keeping families and villages united in both work and fun. Then when the work is done, the members of the village gather for feasts and celebrations.

Kunama culture is unique in that, Kunama are the only Eritrean ethnic group that traces their ancestry on their mother’s side. Kunama society is one that values unity and equality among all of its members. Kunama are known for their unique and lively dances which show their rich past by reenacting historic events. Respect for elders is also something that Kunama value, as they look to village elders to make important decisions for the entire village.

The Kunama people’s innate kindness and lighthearted collectivist culture, is compelling and beautiful. 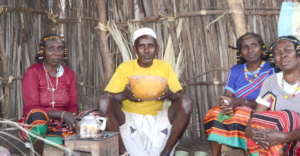 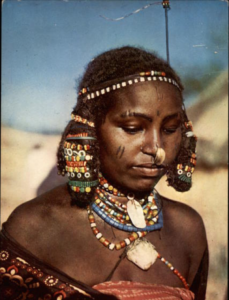 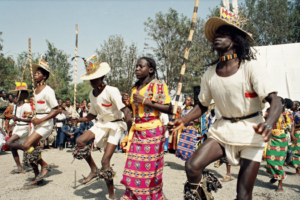