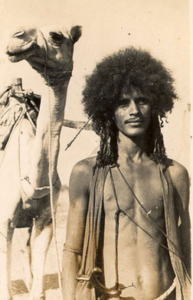 The Hedareb (also called Beni Amir or Hadendoa) are a Cushitic ethnic group found in the western and northern parts of Eritrea. Hedareb are a subgroup of a larger ethnic group called Beja, whose population of one million people are scattered around Eritrea, Sudan and Egypt. The Hedareb of Eritrea are semi-nomadic shepherds who travel around with their herds of livestock as well as camels. Hedareb are experts in caring for camels and livestock and this is represented in traditional songs and folklore. 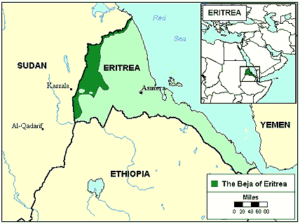 Hedareb practice Islam and can be found in the wide area between Barka and Sahel. They live in rectangular portable tents that are made of woven goat hair made by the women. Camel’s milk, beef and grains are staple foods in their diet. The social structure of Hedareb consist of clans, which have anywhere from one to twelve families, that trace their ancestry on their father’s side. Each of the clans has their own pastures and water sites. The people of different clans are kind to one another and with permission allow each other access to water sites when in need. Any disputes between clans are settled using traditional Hedareb law. 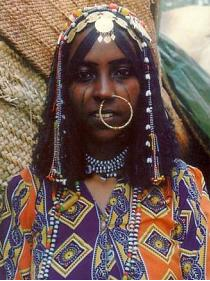 The woman of the Hedareb wear vibrant colored dresses and scarves that they drape on their bodies. Woman tend to have a large nose ring, and other pieces of jewelry that are found throughout their body. A prominent piece of jewelry found on a woman is a gold headpiece with beads. They wear their hair in small long braids that are accented with decorative beads. Hedareb men wear a long white dress called Jelebiya, accompanied with a black vest. Cheek scarification is a common thing seen on the faces of both men and women. Hedareb dance is known for the swaying of the body as well as swaying of the arms and neck to the traditional music. Dances often tell stories and display traditional Hedareb way of life. The men carry swords as they dance and both men and women lean their heads back facing the sky swaying from side to side.

The Hedareb are protective people who are known for their hospitality. They add a unique and tradition based culture to Eritrea.