Rashaida are an Arabic speaking nomadic ethnic found in the Northern Red Sea Region of Eritrea. Rashaida practice Islam and the name “Rashaida” means refugee in Arabic. Rashaida left Saudi Arabia due to ethnic warfare and settled in Eritrea and Sudan in the mid 1800’s, this is where their name ‘Rashaida’ came from. They are to the Bedouins, which were a nomadic group that live in the deserts of Arabia.

Rashaida dress for the women consists of a colorful red-and-black geometric patterned dress embroidered with colorful threads and beads. The colorful dress is also worn with a long, heavy black veil called a Burqa that covers the face and body.Girls begin to wear the shielded veil at around the age of five. The men wear a long white dress called a Jalabiya along with a white and red checkered scarf called a Keffiyeh, wrapped as a turban on their head.

Rashaida live in goatskin tents, they are camel herders who mainly breed sheep, goats, and the women are known to craft beautiful jewelry that they sell at markets. Rashaida culture is patriarchal and marriages are usually arranged by the family. Their dance consists of the men dancing elaborately with swords while a group of people surround them clapping, jumping and beating drums. The women dance in the middle of the circle by waving their arms and scarves around and jumping from one side of the circle to the other. 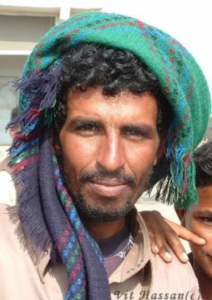 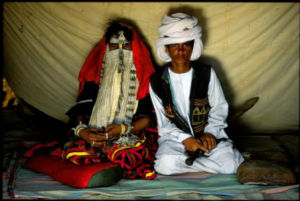