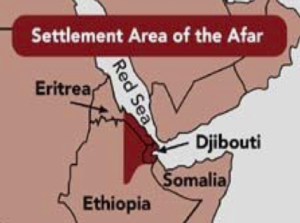 The Afar (which translates to mean the free) people of Eritrea are a Cushitic ethno-linguistic group, that live in the Southern Red Sea region of Eritrea. The area they live in is called Dankalia and is known for its hot dry climate with temperatures that can reach as high as 145 F. The Afar can also be found in the neighboring countries of Djibouti and Ethiopia. The area they occupy among the three countries is called “The Afar Triangle” because of the shape of their settlement. Afar make up about 4% of the Eritrean population and the language they speak is also called Afar. They mainly practice Islam and typically live in isolation with a social structure that is most commonly organized in clans, or a group of families. 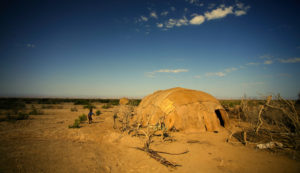 The people are mostly nomadic pastoralists and their livestock consist of sheep, goats and camels. Many near the coast are fisherman and some are known to mine salt that they trade with the inland inhabitants of the country. Afar follow a patterned movement among several regularly visited places, at least one of the places they rotate among is permanently occupied by a part of the population. Afar live in huts called ari which are made of palms that are light enough in weight to be transported with a camel when it’s time to migrate to the next location. The Afar diet mostly consists of meat, fish, milk and porridge. Milk is very important and used as a social offering to guests as a welcoming gesture. 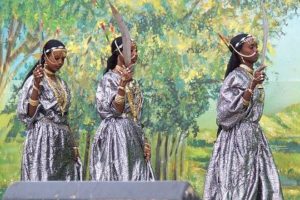 Afar hold great importance to a man’s strength and bravery. In the old times, killing enemies was the way in which young men earned respect and prestige and earned privileges such as marriage. Afar are known to have unique dance styles. Laale a dance exclusively performed by men and Malabo , a dance exclusively performed by women. Another dance style is called Keeke which is typically performed at wedding ceremonies by both men and women. Afar women dress in brightly colored dresses and scarves. They are known for the gold headpieces they wear that sometimes cover more than half of their face, with several layers of gold necklaces, bracelets and earrings. The men’s dress can be described as a big cloth garment wrapped around the waist as a fitted skirt, a white t-shirt, and a red headband that ties in the back. The men also carry a traditional curved dagger knife called a jile , around their waist. Afar women dance with the jile when performing Malabo.

Afar are certainly fearless and strong, and their culture is an undeniably unique and beautiful one in Eritrea.