The Tigre people of Eritrea are a nomadic ethnic group located in the Gash Barka, Anseba, and the Northern Red Sea region.They can also be found in Sudan but the majority reside in Eritrea. They speak Tigre which is a language derived from the ancient language Ge’ez (like Tigrinya). The Tigre language is the second most spoken language in Eritrea coming in second after Tigrinya. The Tigre people are predominantly Muslim with a small percentage practicing Christianity known as the Mensaï.

Tigre dress for the women consists of colorful scarves and skirts. Shämma is a large piece of cloth that woman wrap around their bodies to make a dress. The woman are decorated in gold jewelry that they wear in their hair, arms, and some wear nose rings. The woman wear their hair in small micro braids in a hairstyle known as fegiret, which is a common hairstyle among several other Eritrean ethnic groups. The men of the Tigre ethnic group wear a white jeleybia with some sort of vest. The Tigre people work as farmers and herders producing cereals during the rainy season. They have a rich spoken literature that consists of fables, fairy tales, riddles, poetry, and supernatural stories. They tend to keep with their traditions one of which is having a village leader.

Tigre mode of transportation is a donkey or the country’s animal a camel. Their marriages are arranged through discussions with the parents. The act of marrying a relative is common among the Tigre people and is done so because they want to keep the wealth among the family. Celebrations are done so with song and dance consisting of a drum and a string instrument called a mesenko. The woman sway their bodies and shake their hair to the music. The men typically have a sword when they dance and they sway their bodies to the music. 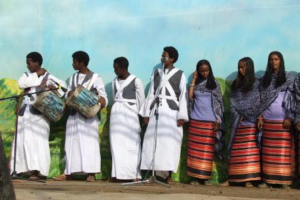 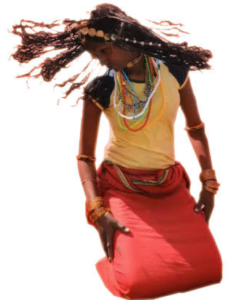