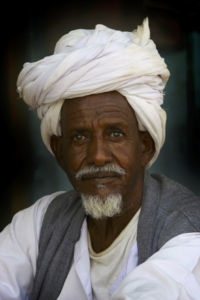 The Bilen people of Eritrea are a Cushetic ethno-lingustic group, and are found in the Anseba region of Eritrea in and around the its capital city Keren. The Bilen make up 2.1% of the Eritrean population and the language that they speak is also Bilen. The primary religion among the Bilen people is Muslim and Catholic. They lead a patriarchal and male dominated society where the man is the breadwinner mainly working as an agriculturist, while the woman stays home to look over the house and children. 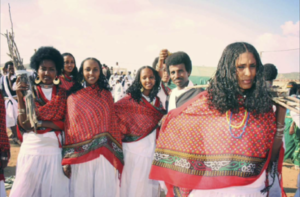 Bilen women are the heart of their households playing the role of caregiver and homemakers. The women of this ethno-linguistic group are known for their brightly colored clothing. Silver and gold jewelry decorates a Bilen woman’s body. The most prominent piece of jewelry found on a Bilen woman’s body is a nose ring which symbolizes a woman’s social class. A married woman drapes a gold ornament called Sardat on her forehead. One of the traditional dances is called shelil, a head dance in which women shake their heads from side to side. Bilen men typically wear a white short-sleeve button up shirt with white pants, and a black vest. The children of Bilen keep a short patch of hair on their head until they learn to walk. Young boys keep this patch on their head until the age of ten, which is when they shave all their hair off. 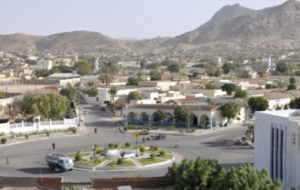 The city of Keren (second largest city in Eritrea) is the capital of Anseba, and is located in the central part of Eritrea. Keren is surrounded by seven hills which is how it derived its name. The city has a calm pace and a warm climate giving it a chill environment. Keren is a major agriculture center for Eritrea providing both vegetables and fruit. Keren is also known for its livestock providing dairy products, which is used to make dishes that are popular among the Bilen people such as curd. The cities architecture is heavily influenced by the Italian colonization, and also the Muslim influence giving it a Middle Eastern feel.

The culture of the Bilen people shines brightly beyond the Keren mountains.